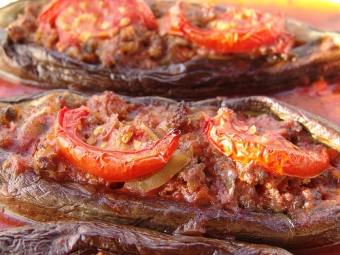 Cut the stem of the eggplant but leave 2 cm on it. Cut the entire leaf of the stem in a cone shape. Peel the shells with a little bit on the front and the end (This prevents it from dispersing after the fry). Draw the eggplants deeply from the beginning to the end. Put some water in a bowl until half. Add salt and mix. Put the eggplants in salt water and wait at least 30 minutes to let the bitter water drop. Then wash and dry. In a pan fry the Berrak Extra Virgin Olive Oil. Put the eggplants in a pan and fry both sides with a golden yellow color until the eggplants are soft. Take the fried eggplants from the pan, take on napkin or the kitchen towel, filter excess oil. To prepare the mixture, fry oil in a pot, add onions and 2 clove garlic, cook for a few minutes until the onions soften. Add mince and cook frequently with mixing until the mince adsorbs water. Add the tomato and cook until tomato adsorbs water. Get the pot from the fire and mix chopped parsley, salt and pepper. Align fried eggplants on a tray. Fill the mixture you prepared to the slits in the middle of the eggplants. Adorn on it with tomatoes and pepper if you like. Add 2 sliced of garlic into the bowl with hot water (broth) and pour into the tray. Put the tray in the oven and bake the eggplants 20-25 minutes until softened. Spread the cooking water on it and serve hot.

Eggplant With Mince we recommend with Gherkin Pickles.