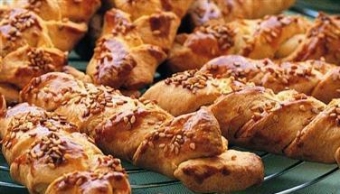 The white cheese is shredded and mixed with chopped parsley in small pieces. Put on top of each other of the yufkas and oiled between them and divide into four parts. Thus, 12 pieces are obtained. The cheese are placed on the wide side of the four pieces. And is tightly wrapped like roll. In order to prevent them from being opened, the end side of yufkas are dipped into water and align on the oiled tray. After egg yolk heve been poured on them. Bake in the oven at 180 degrees.
It’s ready… :)
You can eat with Berrak Mixed Pickles.